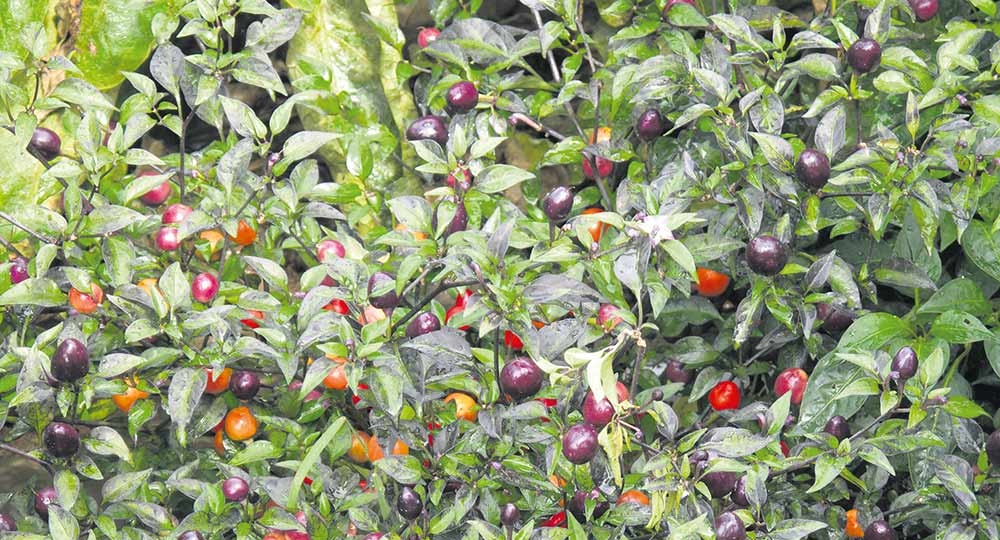 Elizabeth McCorquodale looks at some different and appealing flavours to come in from the garden to spice up your food.

When we think of growing spicy plants in this country the first thing that comes to mind are windowsill chillies or the fleeting heat of summer radishes. However there are many more species on offer than you might think, and each has a distinctive flavour and wildly different methods of delivering their heat.

Szechuan pepper is a lovely surprise in the British garden. It can be grown as a shrub or as a prickly hedge, and with its deep red seedheads, a productive Szechuan pepper bush is a fine sight, though it is the flavour of these seed heads which sets it apart.  On first taste it seems similar to black pepper, but then the extra tang kicks in – a little peppery, a little citrusy – more a feeling than a flavour. We experience the heat of Szechuan pepper through hyper-sensitive touch receptors in our mouths, as well as through our taste receptors, and it is this unique sensation that gives us the physical buzz of flavour.

Szechuan pepper is an essential ingredient in Chinese five-spice powder, but it is best experienced all on its own, ground finely in a pepper mill or mortar and pestle. To make a wonderful, versatile seasoning roast a ¼ cup of Szechuan peppercorns in a heavy frying pan until they begin to smoke, then turn them into large mortar and pestle and grind them with ½ a cup of rock salt until it is reduced to a fine powder. Use this seasoning in rice dishes, stir-fries, soups and marinades or – my favourite – dusted over popcorn as a savoury snack.

Despite the heat and spicy zing, Szechuan pepper plants are perfectly at home in British gardens, with the species Zanthoxylum simulans and Z. schinifolium hardy down to -15°C when they are well established. Until then it is a kindness to provide a windbreak in exposed conditions and to mulch around young plants. These shrubs respond well to pruning and will repay a late winter mulch with a good crop of seed heads in summer.

Pick whole clusters of seed heads in late summer just as they begin to open. Dry these heads indoors on paper for a few days. The seed heads – which look like tiny beech nuts – are the part of the plant that you are after, not the seed.  Once dried they should be stored in airtight containers and kept out of direct sunlight.

The experience most of us have of wasabi is of the paste which is served up with restaurant or supermarket sushi, though this is often a combination of horseradish and mustard, with just a touch of true wasabi added for authenticity.  True, unadulterated wasabi is full of flavour with a character all its own.

Wasabi japonica is a slow-growing, shade-loving perennial native to Japan and other parts of Eastern Asia. It likes damp to wet soil and a humid summer and it is hardy down to -5°C. Wasabi can be grown on the edge of a shady pond with its feet wet or, like homegrown watercress, in a very large pot placed in a saucer permanently topped up with fresh water.

When you first receive your wasabi plant, plant it up in a pot of good compost to allow it to develop a good root system before it has to cope with the harsher conditions of the garden. Place it in a cool, shady spot and water it well for a month or so before transferring it to its permanent home. Mulch around the crown with well rotted manure or a rich garden compost and feed it occasionally with a balanced fertiliser. It will reach just over knee height when established.   You can harvest a few tasty leaves through the first summer but you must wait for the end of the second summer before you can harvest the rhizome. To harvest the root pull up the whole plant and break off the rhizome, then re-plant the crown, mulch it and bed it back in for winter. A fleece blanket or straw mulch will ensure that it can cope with the severest weather.

Wasabi is a very beautiful plant, not bothered much by pests or other troubles and the taste of fresh wasabi as opposed to pre-packed preparations is incomparable.

Horseradish is one of those plants that, if it were rare, would be prized as a delicacy. Familiarity truly breeds contempt in food circles. The deliciously hot, well-rounded bite of horseradish is hard to beat but it is rarely seen in recipes except as an accompaniment to roast beef or oily fish such as trout or mackerel. What a shame, for the distinctive heat of horseradish teams beautifully with potatoes, in mash or in salads, and it is perfect to stir into rich winter stews, dips, pates and creamy salads. One of the best ways to use it is to finely grate a little horseradish root into a knob of melting butter and toss a handful of just-cooked green beans in the tasty glaze.

Horseradish is an invasive plant which can be found along almost any verge or roadside or growing wild as an allotment runaway. It isn’t that it is particularly quick spreading, just that once it gets hold it just doesn’t let go. Future problems can easily be avoided by planting it into a corner surrounded by lawn (this is equally effective when planting mint) so it is kept in check by mowing. Horseradish needs no special treatment and is easy to harvest; dig it up, chop off however much root you need and replant the rest. Clean your root, but don’t peel it, and store it, wrapped, in the salad crisper of your refrigerator.

The British have a love affair with the great and glorious chilli, and the hotter, it seems, the better. While it might be impressive to try to consume the world’s hottest peppers, it has to be said that it is far more satisfying to enjoy the flavour combinations of the milder, more flavourful cultivars, of which there are hundreds to choose from. Chillies come in a huge variety of colours, sizes and flavours, from sweet and chocolaty to lemony and fiery and with all sorts of other flavours in between.

Most chillies aren’t annuals, though we usually grow them as such. Chilli plants will keep on going for several years, their yield growing each year until they begin to decline again after the fourth or fifth year.

A few little know truths about growing chillies are that, while they need to be germinated at high temperatures (28°C, on average), once they begin to  grow they do not like being too hot, neither at leaf or root level. They do not like their soil drying out and they appreciate a bit of humidity, so stand them on a saucer of damp gravel.  They will only keep producing if you keep feeding them, so feed every week with half strength tomato food and help them to set fruit by dusting the flowers with a soft paintbrush, tickling the bristles over the inside of the flowers, picking up pollen from one and spreading it to the others.

A few chillies growing on a winter windowsill is a comforting site, bringing both warmth and colour into the winter kitchen.