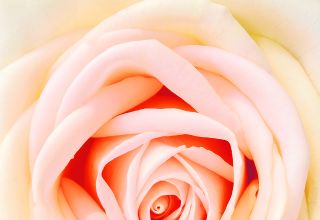 Roses are one of the essential garden plants: easy to grow, long-lived, perfect for cut flowers, with sensational scents, full of romance and history. There are so many colours and types to choose from and they can go in any spot in your garden.

Roses have for centuries been an essential part of any garden in this country.

After a dip in their popularity they are back again up there in the top plant lists – and it’s not surprising, given the range of types, shapes and colours.

They will give you scent, vibrant colours or subtle shades, they are tough plants, they will climb gracefully up a wall, they can form a hedge or line a path, or can be grown in a container. Not many plants have such a wide range or are as versatile and are a great perennial, giving years of value and pleasure to the eye.

They are popular again because rose breeders have come up with disease resistant varieties, those that flower throughout the season, and in many different colours.

Roses have a long and colourful history. They have been symbols of love, beauty, war, and politics. The rose is, according to fossil evidence, 35 million years old. In nature, the genus Rosa has some 150 species spread throughout the Northern Hemisphere, from Alaska to Mexico and including northern Africa.

Roses have been used as garden plants for centuries, going back to Biblical times and beyond, and grown in different parts of the world. The Greek writer Theophrastus wrote three centuries before Christ about his roses of hundreds of petals – surely cultivated roses, not the wild rose with its five petals. Roses have been depicted on ancient Greek coins and Garden cultivation of roses began some 5,000 years ago, probably in China. During the Roman period, roses were grown extensively in the Middle East. They were used as confetti at celebrations, for medicinal purposes, and as a source of perfume. Roman nobility established large public rose gardens in the south of Rome.

The Irish playwright and poet Richard Sheridan was so struck by the beauty of his future wife Elizabeth Linley, he said on their first meeting. “Why don’t you come into my garden? I’d like my roses to meet you”.

In the Middle Ages the rose was particularly valued for its medicinal qualities. Then it became an important symbol, in the church and with royalty, King Edward I choosing a rose as his symbol. The white rose of the House of York and the red rose of the House of Lancaster of course became the symbols of war and the struggle for control of the country – the Wars of the Roses.

It wasn’t until the late 18th century that cultivated roses were introduced into Europe from China. Most modern-day roses can be traced back to this ancestry. These introductions were repeat bloomers, making them unusual and of great interest to hybridizers, setting the stage for breeding work with native roses to select for hardiness and a long bloom season.

We have Napoleon to thank for much of the interest in roses, or rather, the Empress Josephine. She collected a vast collection of roses at her Chateau de Malmaison in Hauts-des-Seine, just outside Paris. She set the fashion for the 19th century, with more than 250 varieties in the chateau’s beautiful garden, which can still be visited. 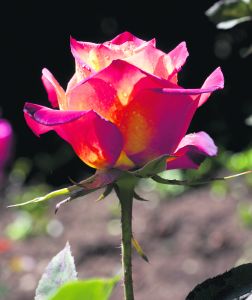 Until the late 18th century roses grown in this country and Western Europe were red, white or pink. Then yellow wild roses were discovered growing in the Middle East. Wild roses from Afghanistan and Southwest Asia blossomed in colours from pale yellow to deep sulphur. When these were brought back to Europe they caused a sensation. Immediately they were planted and the first attempts at hybridization with yellow roses took place.

Modern rose breeders have sought resistance to disease and longer flowering periods than just the glorious flush in June. After 50 years of intensive breeding, David Austin’s English Roses combine the beautiful forms and wonderful fragrances of old roses with the wider colour range and repeat-flowering nature of modern roses. English Roses are healthy, reliable and very easy to grow.  They quickly form magnificent, shapely shrubs, or many can be trained as short climbers. 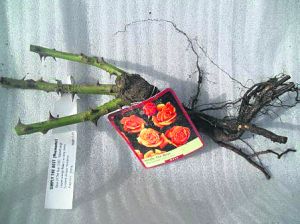 Container-grown plants can be bought all year round, but the choice is more limited than for bare root plants – David Austin Roses stock around 800 varieties in their bare root collection, including many old and rare varieties. Bare root plants are available during the months when the plants are normally resting – between November and April, a good time of year when the roses can be moved and stored with little or no disturbance. Transport of plants is easier this way, it’s more economical and it’s ideal for ordering roses to cover large areas of the garden, and the plants can become established before the weather starts to get warmer. 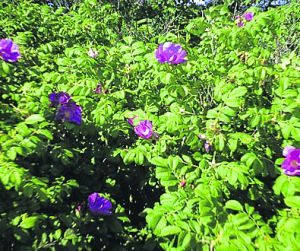 A rose hedge will give you lots of flowers, then attractive red rose hips in the autumn. Rosa ragusa, often called the Japanese rose, comes from Japan and other parts of eastern Asia. Its flowers are dark pink or white and have such a sweet scent that pot pourri is made from them in China and Japan. A strongly growing plant, in some places it’s known as the beach tomato or sea tomato because of its large scarlet hips and because it grows well in coastal areas, also the saltspray rose or the beach rose. Varieties available include ‘Frau Dagmar Hartop’ with silvery pink flowers and the white flowered ‘Alba’.