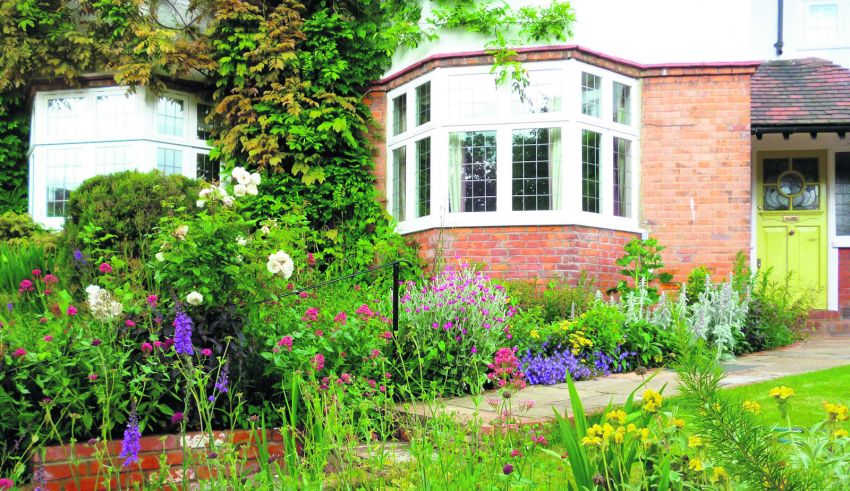 Three Country Gardener readers are among many to share their experiences of spending more time than usual in the garden, organising projects and explaining how it helped them during weeks and weeks of lockdown.

Annette Waller is from llminster in Somerset and moved in her 1930’s house eight years ago with her husband and two daughters. She always wanted to redesign and make their front garden more welcoming but couldn’t find the time – until this spring!

Our front garden has never been the most attractive thing about the house. We love the back garden and that’s where we spend the time so its always been a priority, but the front always seemed to be somewhere we just quickly walked up the inclined path to get in and out of the house. Over Christmas we sat down and said giving the front garden a makeover was a priority – but when would we find the time?

Of course come mid March there was all the time we needed. Over the next few weeks work stopped, home schooling began and we had time on our hands. So out came the idea-let’s organise a project- the front garden. My husband was still working for a couple of days a week but I was at home all the time. Our goal was to create a tidier, natural-looking garden that would be of interest both from the street and from the house, and over all four seasons.

Our front garden is seen and used by so many different people: neighbours,visitors, passers-by, but it never added anything to the house.  We agreed we wanted to walk up the street and be greeted by a garden in harmony with the house, that looks like it belongs.  We didn’t need heavy excavation work so it was a proper horticultural project.

After a couple of weeks of research we were able to get plants delivered from a whole variety of lovely and helpful nurseries who took our calls and were thrilled to have the business.  The garden is south facing so after a huge tidy up which took two weeks we added low growing shrubs with light greens, reds and yellows the key colours. It was the time of year for new planting so we bought grass miscanthus, which gave us a light screen near the gate.

I tidied up and reseeded the  small lawn. We had never made much of the borders either side of the path. There was a white rose which had been neglected and I managed to take out weeds, stake it and feed it. I dug up the border added some home grown compost from down the end of the garden and planted more shrubs which I though would suit the seasons like Nandina domestica or Erysimum ‘Bowles Mauve’. I planted mainly perennials and spent time making sure what I ordered would extend the season into early winter. I trimmed the hedge at the bottom quite drastically and took out old dead roots.  I washed down and re grouted the brickwork  around the bay window. Oh and I sanded down and painted the front door a nice lime green. And insisted recycling bins never spoil things so created a special corner for them.

I did most of the work and became a bit selfish about the project. The wonderful weather throughout May in Somerset made it a pleasure to be out in the garden for hours on end. Without the lockdown it wouldn’t have happened and I hope it has been worth it. It isn’t a finished project but it has made a difference in more ways than one.

Peter Cunningham started to create a Devon garden from scratch and during lockdown, and having a blank canvas to start ended up being a blessing.

Just after Christmas I moved into a new house outside of Barnstable. It was a bigger home for my wife and I than we had planned for but we took a risk and decided to stretch ourselves that bit more financially. What a time to have made such a decision!

The garden plot is about a third of an acre shaped around the house, west facing and had lots of potential, someone had told me. Our problem was we had no budget to do much with the garden and decided to wait until we had time and perhaps a bit more money. But lockdown changed all that. My work with a travel company was virtually stopped and I faced being at home full time. My wife’s part time job was certain to end.

So in the sunshine of May weather we dedicated weeks to a new garden.

The combination of a heavy clay soil and no money was a challenge.

As I stood on the very first patch of earth I owned it was hard to imagine what I could do with a space overlooked from every corner by several neighbouring properties. What is more, the soil was overrun with weeds, the lawn was worn and full of moss.

It was standing there that I began to use the gardener’s most important tool: their imagination. Visualising an outcome is such a useful tool and none more than planning a new garden. A good imagination also helps overcome nerves about making bold changes such as the layout of your garden.

‘Having time at home and time to reflect was perhaps the biggest benefit. We decided not to rush, to take time and take stock’

Visualising the garden as you would like it plays second fiddle to one key thing: getting to know it as it is. We spent days preparing the soil and laying out where we thought a path might be and where we could have borders. We ordered roses which came in wonderful packaging from a nursery which was very helpful. I seeded a small area with grass and planted two  small and cheap acers.

Over the course of these weeks I noticed what must be very important for gardeners, the movement of the sun and the position of light and shade This was as important as even than soil quality as time went by because it would determine the layout of my new garden and the position of the inhabitants within it.

In short, having the lockdown time meant me not rushing into my garden and helped me to see exactly what I had to work with and to develop a picture of what could go where. So that’s my first piece of advice.

Don’t rush a garden to begin with.

Sit back, relax and visualise. And use the time wisely-for we certainly had plenty of that.

Andy Vernon used the lockdown time to build the garden pond in his Hampshire home his wife had always been talking about but really never made up her mind about.

“Should we have a pond in our garden? There are the cats to worry about and I think it’s a problem keeping the water clear! And it would be too much work for you. But it would be a nice feature wouldn’t it”. Such as been the regular conversations my wife has been having over the last few years.

I am 55 and a tolerant gardener but would never admit to loving gardening. My job was due to go into lockdown from mid April and I was facing being at home for weeks if not years if you read the wrong newspaper.

We became positive,  and didn’t read every word written about the dreaded virus and decided to find things to do.

Our Hampshire garden is not huge but we have a lawned area down the end which was always likely to be a site for a pond. My wife loves wildlife and buys and plants things with wildlife in mind

I like planning so I took on the role of pond researcher and probed gardening books, the internet and a helpful friend – and tried not to be overwhelmed by the amount of work. The first thing was to be sensible about the size. This was not to be a big pond.

We chose a flat and picturesque bit of the garden as the location .It got sunlight throughout the day. We have three active cats but no children so there was no need for any fencing.

Our biggest worry was that as lockdown became more intense would we be able to get supplies delivered? It wasn’t an issue and online ordering in April was straightforward and quick.

The one lesson I would pass on from this experience is don’t skimp on the base or liner.

We bought the strongest high-quality polymer we could find, expensive but tear resistant. Weaker linings we were told meant frequent tears and money!

So I measured, marked out, sat down and reflected.  The pond was two metres by four metres. Digging the soil out was something I dreaded. The restrictions meant I couldn’t ask my son-in-law to come and help – it was down to me. I took my time, stopped and read up on the subject. It seemed like four weeks of digging. I am re-assured it was only one week.

Yes ,it was slow going .The angle of the pond seemed important to allow wildlife in and out with a sloping ‘beach’ on one side and 45 degrees angle on the other. I had ordered a huge sack of sand. Getting the lining in and straight and cut wasn’t easy. We wanted to have an area for plants round the pond also.

I loved having a project. It seemed a focus for all the worry and stress around us. It wasn’t something I would have taken on if I hadn’t been at home for weeks and weeks.