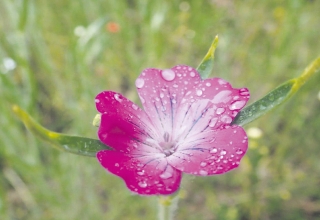 Over the next few years the summer view as you travel down roads throughout the southwest could look a lot more floral.

A long-running campaign encouraging councils to let neatly-mown grass verges become mini meadows where wildflowers and wildlife can flourish appears to be building up a head of steam. And areas of the southwest are leading the way.

Since 2013, Plantlife, the wild plant conservation charity has been telling local authorities the move could help them save money and boost their green credentials.

Several have taken the message on board and this summer for the first time flower meadows have started to appear on roadsides.

Plantlife’s campaign highlights the fact that over 700 species of wild flower grow on the UK’s road verges – nearly 45 per-cent of our total flora. And where wild flowers lead, wildlife follows with a multitude of bees, butterflies, birds and bugs. All enjoyed by 23 million road commuters.

However, road verges are under considerable pressure. Priorities for safety and access, alongside budget constraints, a desire for ‘neatness’ and difficulties with the collection of litter and grass clippings all mean that enhancing their wildlife value is often low on the list.

Plantlife wants flowers to be allowed to flower so pollinators can work their magic and seeds can ripen and fall to the ground. In this way, the floral display will become better and better every year.

Plantlife started this campaign in 2013 in response to protests from the public horrified by wild flowers being mown down. A few roadside nature reserves is not enough. They want to transform the entire network. There are nearly 500,000 kilometres of rural road verge in the UK. This is equal to half of the remaining flower-rich grasslands and meadows: their potential is enormous.

Highways England is also committed to a national biodiversity plan which is supported by a £30 million investment programme over five years. The plan recognises road verges and adjoining land can be managed to provide areas of wildlife habitat, relatively free from human access. These road verges can also be used to connect fragmented areas of habitats, enabling plant and animal populations to move and interact, and so become stronger and more resilient.

The wild flower scheme on the A38 was started last year when seeds from over 20 variety of flowers, including cornflowers, oxeye daisies, yellow rattle and poppies were sown over five hectares of roadside verge between Ashburton and Ivybridge, adding to the ten hectares that have recently been created along the A38 and A30 in Devon and Cornwall.

Highways England senior ecologist Leonardo Gubert said: “This is the third wild flower scheme we have delivered in the south west and we’re delighted it’s proving so successful.

“The scheme will add to the diverse mosaic of habitats along the A38 and will support a number of pollinators and other invertebrates, including five rare species of beetles and a whole host of other wildlife we recorded at the site before the work was undertaken.

“We’re already looking forward to carrying out a full survey next year to see just how many benefits have been brought to our verges and we’re proud to be delivering such an important programme on roadside land.

“We are also planning more wild flower areas and a number of schemes are being designed for verges on the M5 and M4 in the future.

Plantlife said a “cut less, cut later” approach by councils and highways authorities could significantly improve the health of the UK’s verges.

It said: “We want flowers to be allowed to flower so pollinators can work their magic and seeds can ripen and fall to the ground. In this way, the floral display will become better and better every year.”