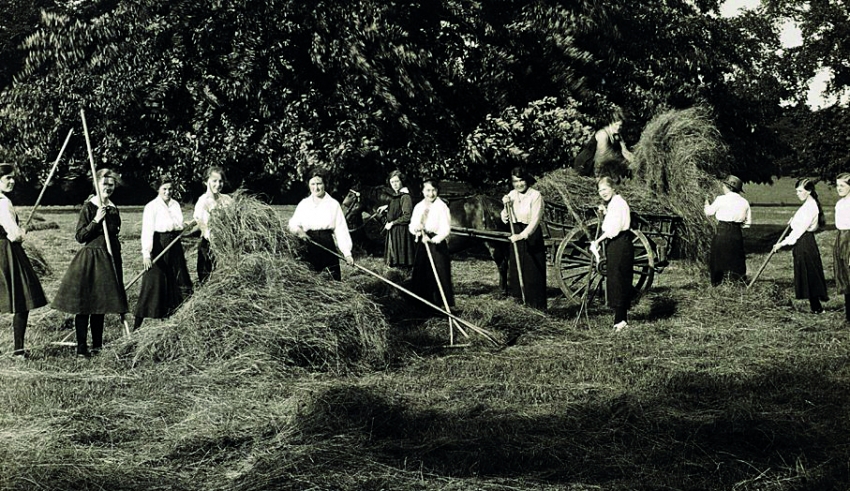 A century ago the ‘War to end all wars’ was still raging. The battle of Passchendaele, also known as the third battle of Ypres, had dragged to its close on 10th November 1917 after three solid months of fighting. As we look towards next year’s anniversary of the ending of the war in 1918, in this Remembrance season it’s timely to think of the toll the war took on horticulture, the great gardens of the time and especially the huge numbers of professional gardeners who were lost.

Before war broke out in 1914, the big gardens and estates throughout Britain had teams of gardeners keeping extremely high standards of gardening, including growing exotic plants from seed, fruit and vegetable growing, the cultivation and breeding of roses, and tree pruning.

Huge amounts of money and labour was spent on the big estates, with vast heated glasshouses growing fruit and vegetables for the dining table, producing cherries for Christmas dinner, melons from hot houses, and cut flowers for grand displays throughout the ‘big house’.

But when the war began, many of the young gardeners were keen to enlist, and as it dragged on, conscription brought in many more, including older men. Many were knowledgeable, experienced, well trained professional gardeners, and many did not return. Knowledge and experience was lost.

The senior gardeners who were too old to fight were left to manage on their own or with young boys who had to take on extra work – and in some cases women were taken on; the older men had trained the teams of labour that were gone.

Since the gardens at Heligan in Cornwall have been restored, the story of the gardeners who went to fight in World War I is now well known; 16 enlisted and only eight returned. Visitors can find the names scrawled on a wall in the Thunderbox Room – the gardeners’ lavatory in the vegetable garden. Their story was replicated throughout the country.

At the Royal Botanic Gardens, Kew, the death toll was 37, while 20 were lost from the Royal Horticulture Society’s garden at Wisley. The horticultural trade was hit badly as well: seedsman Arthur Sutton of the famous seed firm lost 23 men, including four of his five sons. The officer class was severely hit. Heirs to the big estates were killed, one of them the eldest son of Julius Drewe, owner of Castle Drogo in Devon (designed by the architect Edwin Lutyens). Adrian Hendicott Drewe who had been educated at Eton and Cambridge died on the front line at Ypres in 1917, alongside the men from his platoon – between 80 and 100 men. His father never recovered from the loss.

By the start of World War One, the Veitch family of Exeter had changed the British landscape. They had introduced new plant species into gardens all over the country and started the Chelsea Flower Show. But the war brought dramatic changes to the family and its work.

In 1914, the firm’s Chelsea nurseries closed, so the Exeter branch of the company was the only Veitch firm in operation. It had landscaped the University of Exeter and the city’s Higher Cemetery. The Veitch nurseries were specialising in trees and shrubs and were based in New North Road, Exeter. Peter Veitch, a former plant collector, was running the family business.

His son, John Leonard, had been trained at Kew and studied horticulture in France and Germany before the war. He was the intended heir to the business. It’s not known how many of the Veitch nursery men went to war, but John Leonard was one of them. He was part of the 7th (Cyclist) Battalion of the Devonshire Regiment and then the Army Cyclist Corps.

In 1917, Peter Veitch received the Royal Horticultural Society’s Victoria Medal of Honour in recognition of his work. In May 1918, he lost his son and heir. John Leonard Veitch is buried at Thiennes in France. The Commonwealth War Graves Commission (CWGC) – one of the world’s largest horticultural organisations – created the cemetery where he lies.

At the great estate of Stourhead the only son and heir, Harry Hoare was killed in 1917 leading a charge on Mughar Ridge in Egypt. A captain in the Queen’s Own Dorset Yeomanry, he had been sent home to recover several times from injury and ill-health, but despite advice from military doctors, every time he had returned to the battlefield. His devastated parents had to decide on their future and the estate. In 1946 the estate was gifted to the National Trust.

Back home, not only old men and young boys tried to keep the big gardens going as numbers of women were employed. The Women’s Land Army was established in 1917, and although most of the 23,000 recruits worked in agriculture and forestry, between eight and ten per cent worked in market and private gardens. Not all were welcome and after the war most returned to domestic duties.

From the beginning of the war in 1914 German prisoners of war arrived in Britain and were set to work. Some were sent to Dorchester, to the empty artillery barracks at Poundbury.  They were allowed out under guard and relations with the townsfolk were cordial; they swept streets, and tended the public gardens; one even was employed by the writer Thomas Hardy in the garden of his home, Max Gate.

Allotment gardening spread all over the country with food shortages hitting households (80 per cent of our food came from overseas before 1914) and people were urged to ‘grow your own’, the phrase coined before the war ended. As would happen in World War II, public land was ploughed up to grow vegetables.

The war changed society in Britain forever. The big gardens lost much of their skilled labour and were hit by escalating costs. Lavish structures such as the Great Stove, the enormous glasshouse at Chatsworth were demolished. It would take another world war to end the golden era of these gardens but with the loss of so many skilled gardeners, horticulture took generations to recover.

“Some corner of a foreign field that is forever England”

In 1915 a mobile Red Cross unit started recording the names of the dead at the front line and planting flowers round their makeshift graves. This led in 1917 to the establishment of the imperial war Graves Commission. The new cemeteries were conceived as gardens. A design by Sir Edward Lutyens at Forceville on the Somme became a template; a walled garden with plain headstones with planting suggested by Getrude Jekyll. A simplified form of this endures -low growing alpines in front of headstones, roses and perennials in between, bringing to these ’foreign fields’ scents and textures of a traditional cottage garden. Finding more than one million permanent-resting places took until 1938. One year late the commission’s work started again.