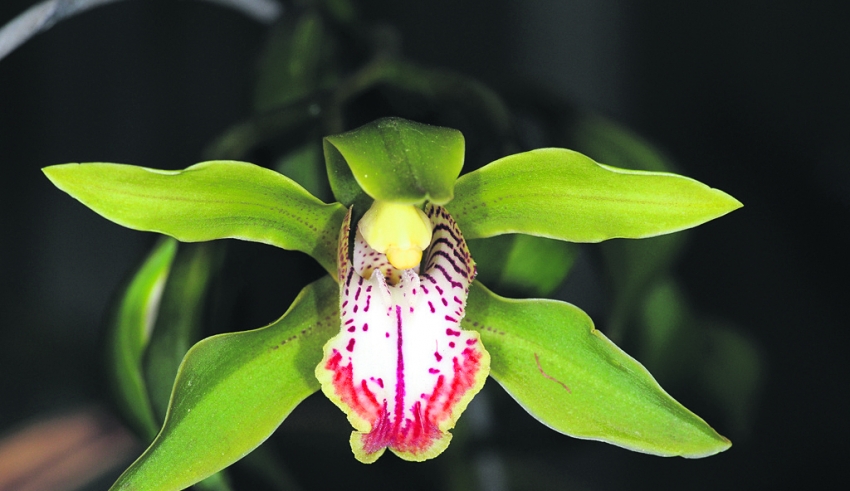 We can buy an orchid plant in a supermarket. We can buy more unusual orchids from a specialist nursery. But in the 19th century these beautiful plants were so rare that men were sent all over the world to look for them and when they brought them back the prized specimens were sold for huge sums of money.

Luxury was the watchword with orchids and just as in the 17th century when vast sums were paid for tulip bulbs in the ‘tulipmania’ period, so 300 years later ‘orchidmania’ gripped wealthy Victorians.

The larger nurseries sent out plant hunters to the Far East in search of these rarities, and the trophies were to be seen in domestic conservatories, as corsages adorning ladies’ ballgowns, and in the dining rooms of wealthy families as the craze spread and fine collections of china and porcelain were decorated with orchids, often painted by ceramic artists from life.

Just one per cent of orchid species are found in Europe. The Orchidaceae family is one of the largest of the flowering plants, but most of the 26,000 species grow in the tropics and subtropics, many areas of which were unexplored by Europeans or from other parts of the Western world.

In the 1770s Sir Joseph Banks brought dendrobium orchids back from his historic voyage with Captain Cook, but it was in the 19th century that orchid growing in Britain really took off. Many plants had perished on the long homeward journey across the sea, and if they arrived, conditions were generally unsuitable, even the stove houses and orangeries of the time.

The breakthrough came with the invention of the Wardian case, a mini-greenhouse that revolutionised the transportation of plants on board ships (and continued to be used until the 1960s as freight on planes), and the improved methods of building glasshouses and conservatories along with the abolition of the punitive Glass Tax in 1845.

The vast improvements in industrial technology, with the invention of plate glass, frost-resistant waterproof cast iron and more efficient hot water systems, meant that vast glasshouses could be built, the greatest of them the Crystal Palace built for the Great Exhibition of 1851 in London’s Hyde Park, but there was also the Great Conservatory at Chatsworth and other marvellous glasshouses were built on private estates.

Tropical and sub-tropical plants could survive in Britain from this time onwards. Plant hunters were sent out to find and bring back exotic plants including orchids by nursery owners such as Frederick Sander from St Albans (who was appointed Royal Orchid Grower by Queen Victoria) and the Veitch family who started their business in Exeter before one branch moved and established one of the most famous nurseries in the country, located in the heart of London.

No private estate considered its collection of plants complete without a selection of orchids. Entire glasshouses specialising in orchid growing became the rich man’s toy.

The Veitch nursery in Exeter sent Thomas Lobb to find rare plants in the Far East; Lobb was a Cornishman who worked at the nursery with his brother William, who became a great plant hunter in North and South America, responsible for the introduction of some of the great trees that adorned Victorian gardens as well as many flowering plants.

Thomas Lobb travelled in the opposite direction, going to the East Indies, sailing from Portsmouth in 1843 on an expedition that was to last four years, to Java and the Malay Peninsula, hacking his way through tropical rainforests where the trees reached 130 feet and formed an unbroken canopy. In harsh conditions he discovered lovely rhododendrons, pitcher plants hanging from branches – and trees draped with epiphytic orchids with sprays of delicate flowers.

On his second trip in 1848 Thomas journeyed to the Philippines and Burma and was rewarded with finding more pitcher plants and tropical rhododendrons – but also a fabulous orchid, the fragile Vanda caerula with its lovely blue flowers marked with deeper blue tasselations on branching flowering stems. Many plants perished on the homeward sea voyage, but those that survived made a fortune for the Veitch nursery as the plants sold for £300 each.

Thomas Lobb also introduced to Britain the Vanda tricolor from Java with its fragrant pink-lipped pale yellow and brown patterned flowers, and Phalaenopsis amabilis, a beautiful moth orchid that was the parent of many modern hybrids. He also introduced a natural hybrid, P.x intermedia from the Philippines.

Exploration in Bhutan gave Victorians another exotic orchid, Cymbidium hookerianum named for Joseph Dalton Hooker, the botanist and plant hunter who became a great Director of the Royal Botanical Gardens at Kew.

Most of the orchid collections in Victorian Britain were species and for many years no one knew how to raise a hybrid. It was thought by some to be part of their charm and their exotic nature that they could not be hybridised. But an Exeter surgeon, John Harris, suggested to an orchid grower at Veitch’s nursery in Exeter the way that he thought that one orchid could be crossed with another.

The grower was John Dominey. He followed the advice and the resulting plant was named Calanthe x dominyi, which flowered in October 1856. But hybridisation was slow to take off.  An average sized plant might give thousands of tiny seeds but few were fertile and germination was poor.

The simplest and most successful method was found to be in sowing the seeds on to the surface of a ‘mother pot’, either the parent plant or one containing a fully grown orchid with fairly new compost. Other methods of hybridising were tried but the problems associated with raising orchids in this period meant that they stayed at the high end of the market, rare and pricey.

Charles Darwin was fascinated by orchids and researched the ways in which the plants had adapted over time, co-evolving between different orchid species and their individual insect pollinators. He first worked with British native orchids, then tropical orchids, particularly the white orchid from Madagascar, Angraecum sesquipedale and concluded that it could be pollinated by a long-tongued moth. This insect was identified in 1903 but it wasn’t until 1997 that the moth was actually seen reaching the nectar down the orchid’s 10in nectary and picking up the pollen.

John Lindley, the eminent botanist and orchidologist was acknowledged as the top authority on the classification of orchids and spent a decade writing The Genera and Species of Orchidaceous Plants. He described many orchid species and named them.

More orchids have been discovered since Victorian times – even a night-flowering orchid as recently as 2011. Perhaps no one was ruined by orchid mania in the way that tulip bulbs had done for some people in the 16th century. Nurseries made a fortune, wealthy men built huge glasshouses for these amazing plants – the politician Joseph Chamberlain had 13 orchid houses at his home near Birmingham – and women wore them as a trophy.

Orchids were the plant status symbols of the 19th century. 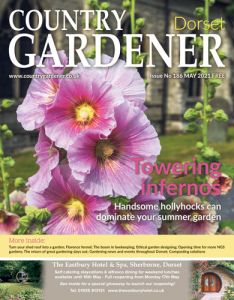