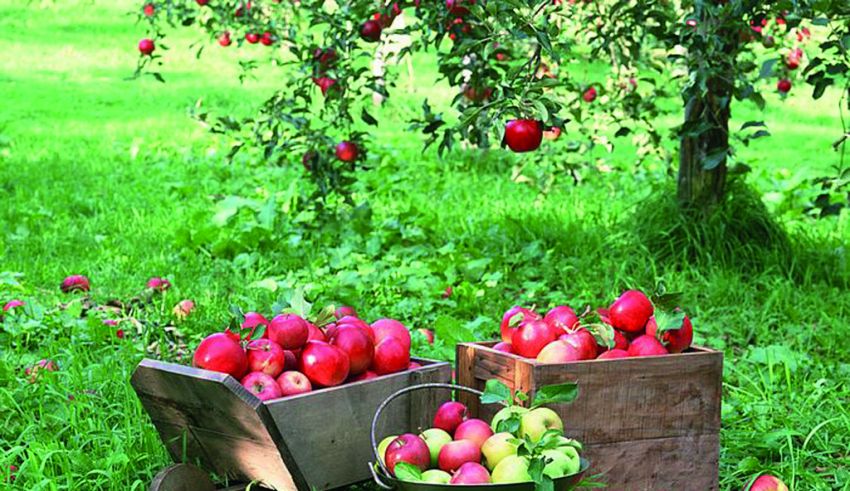 If an apple glut is about to descend on you don’t despair – just take advantage of how versatile the fruit can be.

If ever there was a time to appreciate the apple it is now.

With more than 5,000 known varieties available, it’s a shame that still many people are limited to eating the small selection offered in supermarkets and greengrocers.

For those lucky enough to grow the trees of this incredibly versatile fruit in their garden, the options of flavour, colour, character and use are lengthy.

Despite such a huge range of cultivars the choice of trees at garden centres is not extensive, but with careful planning you can achieve fruit almost all year round. The older, often tastier, and more interesting varieties are often only sold via specialist nurseries but are well worth seeking out.

When choosing which trees to plant it is worth thinking about what you want to use the fruit for.

Ultimately the choice should come down to use and to flavour.

Do you want the apple to cook, eat, make cider from, or a combination of all three?

Also consider whether you want varieties which ripen successionally to keep you covered over a long period, or if you want a bigger harvest with trees that ripen at the same time.

Apples are best grown outdoors in rich, fertile and well- drained soil. They are hardy and will thrive almost anywhere, except under glass or in waterlogged ground or in a frost pocket.

Another consideration with limited space is to choose a variety that is self-fertile – that can pollinate itself.

Although a small proportion of apple trees are self-pollinating, the majority will need a pollination partner nearby – another variety which flowers around the same time to ensure cross pollination can take place.

Making sure your apples keep

Some varieties store better than others; the later varieties benefiting from storage to bring them to perfection.

While a few samples can be stored in the fridge – but will need to be brought to room temperature to be enjoyed at their best – all varieties suit being kept in a cool, dry, frost-free environment such as a garage, shed, dry cellar or unheated spare room. Traditional storage racks are the best option, but wrapping in newspaper is a good second best. Store them in a single layer and make sure they don’t touch each other. The later varieties will keep for up to six months in these conditions but monitor them carefully and discard any that are deteriorating.

Although few people would baulk at eating apple crumbles right through the winter, it seems a shame to not take advantage of the apples’ versatility in the kitchen. When cooking with apples it is worth knowing whether you want it to hold its shape. Dividing apples into ‘cookers’ and ‘eaters’ isn’t black and white as some varieties cross between the two. Instead consider separating them into those that hold their shape – ideal for a classic apple tart – and those that froth when cooked – a Bramley being the perfect example for a baked apple. As a rule the sweeter the apple the more likely it is to hold its shape.

To start your day, take a lead from 19th century Swiss doctor and nutritionist, Maximilian Bircher-Benner, who believed apples had cured him of jaundice as a young man. Correct or not, he did leave a legacy of a self-named quick and nutritious breakfast – bircher muesli, made by soaking oats and adding milk and grated apple.

On the sweet side consider pushing the boundaries away from the traditional and (understandably) much-loved tarts, crumbles, and strudels to trifles, pancakes, ice cream or the Scottish oaty dessert, cranachan. Apples work wonderfully with berries, especially sharp fruits such as blackcurrants, elderberries, or the perfect seasonal pairing, blackberries.

Despite storing well, it is likely that many apple growers will still have a glut on their hands in early autumn.

Fortunately apples contain a naturally high level of pectin which makes them perfect to be preserved and enjoyed through the winter. Although delicious as the star of a jam or jelly, they also combine perfectly with many of the hedgerow fruits ripening around the same time – sloes, damsons,medlars, elderberries and blackberries.

“When choosing which trees to plant it is worth thinking about what you want to use the fruit for. Ultimately the choice should come down to use and to flavour.”