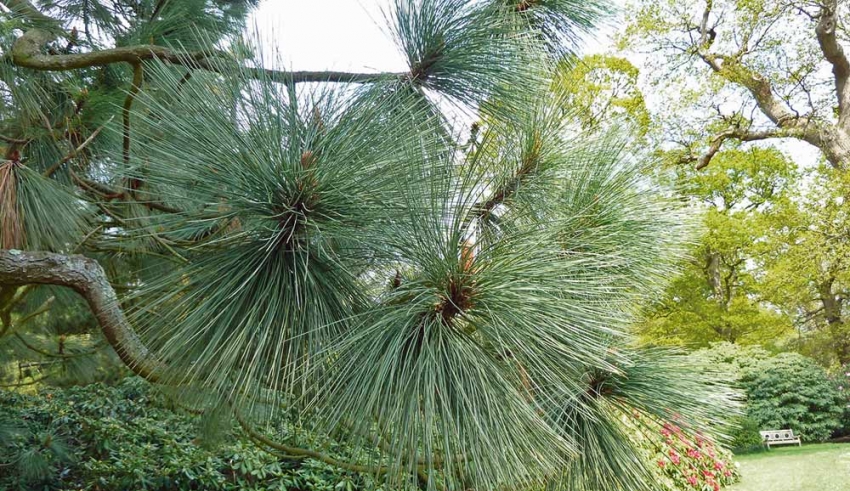 Conifers are back in fashion. Devon nurseryman Grahame Oakey should know. He propagates up to 15 species of conifers at his nursery Acorn Trees and Shrubs and stocks other lesser known, rare and choice plants.

As with many fashions, they tend to go in cycles. Conifers are coming back- better than before, according to Grahame Oakey who has noted a significant increase in conifer interest over the past few years.

For the unconverted,conifers are trees with unique scale-like leaves or needles and their seed-bearing cones are easily recognised. They are mostly evergreen and can grow into large, often very fast-growing trees, although there are many dwarf varieties, including many effective groundcover plants. Many conifers make good hedges too. Yew is a conifer with small cones with a fleshly covering.

Grahame, from Devon based Acorn Trees and Shrubs, grows about 15 species and varieties that he is sole UK supplier of.

He believes that far too often gardeners view the conifer option as just Leylandii or similar invasive large trees.

“However, there is a myriad of species and varieties available from miniatures, dwarves through to larger types; and a myriad of colours, forms and textures too”.

Conifers are more popular than people think with nearly a third of garden owners having a conifer in their garden according to a poll commissioned by the industries Horticultural Trades Association.

When planted they can create height and add exciting form to any garden.

From a small balcony with room for a container, to acres of grounds with space, conifers can add something truly special to any front or back garden, patio, doorstep or driveway.

Also being hardy, low maintenance and easy to care for, conifers are the ideal choice for the novice gardener.

Like deciduous trees conifers can be identified by their ’leaves’ or needles.

Says Grahame “The famous Pinus montezumae is probably one of the most sought after long needle pines available in the UK. It’s very choice, not least for its graceful needles up to 30cm long, but there are only two or three suppliers in the UK.  At Acorn we have both European and Sheffield Park varieties. The Sheffield Park variety, reputed to be the hardiest, though this is not fully proven, was a clone from Mexican stock circa 1910.

“It has gorgeous glaucous needles in other words covered with a greyish, bluish, or whitish waxy coatin, yet my standard stocks are turning glaucous too, and I wonder why.

“Apparently, according to travelling botanists, most Mexican montezumae are less glaucous, yet, there is a notion within the horticultural trade that glaucous plants turn more glaucous to protect themselves from increased exposure to sun rays.

“However, I would like to challenge that, in part, as I’ve experienced the opposite with certain species, and even found some glaucous plants turning green in full sunshine. So why is the Sheffield Park variety so glaucous when it originated from sunny Mexico and came to these damp and humid less sunny lands?

“Perhaps, also, this is an example of the fact that the plants don’t read the text books, and that like many generalisations- there are nearly always some exceptions.

“Montezumae is not rated fully hardy, yet there are specimens growing in Scotland. I’ve heard of a 120-180cm specimen killed off in South Wales during a particularly harsh winter.

“Obviously sheltered spots are best and definitely don’t plant it in a frost pocket. It responds well to food, and can sometimes give 12 inches growth per year, yet it seems late to start new growth in the spring.

“Whilst Montezumae will become a fairly large tree to 20-30 metres over time, but not in our lifetimes, it will respond to pruning and despite keeping a different overall form will possibly look more interesting and more animated with its long ‘arms’.

“A testament to my faith that virtually anything can be ‘bonsaid’, if this can be considered a verb. Bonsai does not have to be miniature- it can be the cultivation of say a 50 metre tree down to three metres, and I know of a P. montezumae kept in just this way for many years in Wiltshire.

“A good alternative to P.montezumae would be P.engelmannii with needles even longer at up to 40cms and a hardier rating. I’ve found them quite popular – grafts and seedlings alike.

30 per cent off your needle pine purchases

If you are interested in adding a long needle pine into your garden Country Gardener and Acorn Trees and Shrubs have a special offer giving readers 30 per cent off all purchases. This offer includes Pinus: coulteri, edulus, engelmannii, holfordiana, jefreyii, montezumae, patula, pinaster, schwerinii, teocote, yunnanensis and more.

“Pinus holfordiana, P.ayaccahuite x wallichiana, with cones to 30cm and needles over 20cm, raised by the Holford family who owned Westonbirt Arboretum 1904 and Schwerinii, “Pinus wallichiana x strobus with needles also over 20cm – both can be seriously glaucous, long needles and are hardier than Montezumae, (fast growing too – up to 60cm per year), as are the shorter needled but very choice.

“Pinus strobus himelblau and Strobus pendula and P. monticola strobicola (a five needle pine with very glaucous needles to 12cm+) all are available from Acorn Trees and Shrubs.

“Pinus patula (needles 15-22cm) are tender, so it’s best to follow the same procedures as P. montezumae, when it comes to frost protection.

“Neither of these like heaps of water, but they don’t like drying out either. If you get die back just cut it off – earlier the better in my view.”

There are many more choice conifers long and short needles, available at Acorn Trees and Shrubs – from second year seedlings to four metre specimens: more than a dozen species and varieties not currently available elsewhere in the UK and another dozen or so that are only available from one or two suppliers for example Taiwania cryptomeriodes.